BY REQUEST: SOLID GROUND - MADE IN ROCK 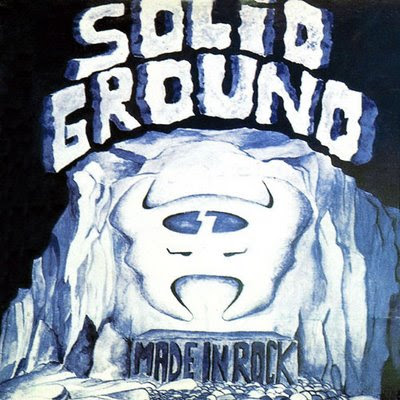 SOLID GROUND was formed in 1974. The members came from other band projects. Anders Berge and Gosta Hjelmqvist was earlier playing in a band called 4-ever, who played more proggresiv rock with lyrics written in Swedish. However they wanted to start something new and heavier, so they started looking for a bass and sologuitarist. After they had tried some bassguitarists, they came in contact with Peter Eklund who had finished job in another band. They realised immediately that this was the bassplayer they wanted. Two months later they came in contact with Bjorn Uhr, who they had known for a while. They asked him if he wanted to join the band, and so they become the SOLID GROUND. The band become Sweden’s heaviest band during the mid Seventies. Solid Ground signed up to SCAM records. A label owned by the former Violents and Hepstars member Hazze Ostlund.

In 1975 the band played a lot of gigs around the Stockhholm area, and also some places outside Stockholm. They also recorded their first single record, with the two tracks: “Tell me” and “My song”. In January 1976 they recorded their album:”Made in rock”. The tracks on the record were recorded in only one day. Two days later they came back to the studio for the final mixing. For many reasons, the record didn’t sell quite well, and finally when the guys was called for their dutys in the army, they decided to quit the band.
TRACK LIST
1-Saturday Rae
2-Just Tell Me
3-This Bloody Town
4-Mata Hari
5-Oh lord
6-Tombstone Kiss
7-Rock'n Roller
8-16
9-Solid Ground
SINGLE FROM 1975
10-My Song
11-Tell Me